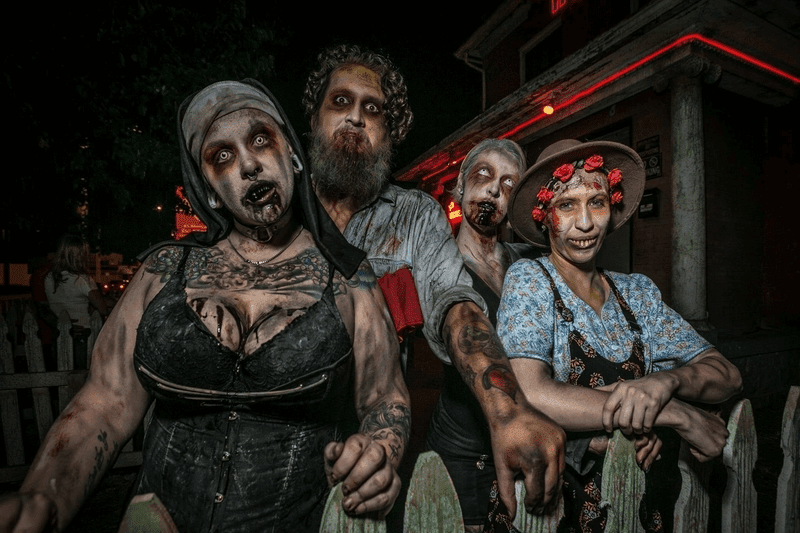 HAUNTED HOUSES IN KY | WANT TO HAVE A REAL PARANORMAL EXPERIENCE?

Looking for some realistic scares this Halloween? You can’t get any better than this real haunted house in Louisville, Kentucky!

Waverly Hills Sanatorium opened on July 26, 1910. It was made to accommodate 40-50 tuberculosis patients, back when tuberculosis was an extremely serious disease. The sanatorium was a place where people could be isolated from the public, get rest, and have plenty of fresh air.

This hospital was a self-contained community and had its own zip code. Everyone who stayed there, including patients, nurses, doctors, and other employees, had to leave behind the outside world. They had their own post office and water treatment facility, and they would grow their own fruits and vegetables and raise their own animals for meat.

Tuberculosis became an epidemic in the area, and eventually, the tiny clinic was filled with more than 140 people, and it was obvious they would need a bigger facility. Construction started in 1924 and finished in 1926. Once it was built, it could accommodate at least 400 patients, and was considered one of the most modern and well-equipped facilities.

The facility served as a tuberculosis hospital until 1961, when an antibiotic to treat tuberculosis was discovered. In 1962, the building was reopened as Woodhaven Medical Services, which served as a geriatric facility, but it was closed by the state in 1981.

Over the next few decades, this Kentucky haunted house was vandalized, damaged, and nearly condemned. However, in 2001, it was purchased by new owners who work tirelessly to restore the historic gem to its previous glory.

Why should you visit Waverly Hills Sanatorium? It’s gained a reputation as one of the most haunted houses in the world. Countless stories have been told of shadow people and ghostly children. Doors would slam by themselves. A mysterious man in white drifts through the corridors of this haunted house near me, and there’s a spectral boy named Timmy who likes to play ball.

Are you brave enough to visit? The hospital offers two-hour paranormal tours of the property and six-hour lock-ins, where you can tour the property on your own and look for ghosts.

This haunted location has been featured on many paranormal television shows, including Ghost Hunters, Ghost Adventures, and Most Haunted. If you’re not a believer in the supernatural, you just might be after visiting this haunted house in Louisville!

Ever been to a theme park and thought that it could be a bit spookier? Step inside this haunted house KY amusement park!

Wicked World Scaregrounds offers three KY haunted house attractions to enjoy. First is the Valley of the Dead. You’ll visit a gas station on the outskirts of town, owned by Earl Piper. After a freak accident that burned the right side of his body, weird things started to happen to Earl. He claims that he can see people on the other side who have yet to cross over. Earl says he can even see places that are thin enough for people to pass through, so the living can walk amongst the dead. Can you visit the other side and make it back alive?

Next is Nightmare Haunted House. Sarah inhabits the haunted house near me, and she has the mystical power of bringing her dreams to life. However, her dreams have made everywhere she goes dark and twisted. After coming back from a stay in the mental hospital after killing her parents, the town of Cedar Grove has been corrupted…as well as its visitors like you. Will you be twisted into one of Sarah’s nightmares?

The last haunted house in KY is The Hunted. General D. Kay has one goal: to create the ultimate war machine. He finally had success in making the ultimate super soldier by messing with their DNA. It didn’t take long until one of these creatures escaped. Now he has freed all of them to take over Fort Greenwell. Can you help get this situation under control…or will they get you first?

In addition, this Kentucky haunted house complex has three exciting escape rooms, food vendors, entertainment while you’re in line, a fire pit, a DJ booth, photo opportunities, and a gift shop. What more could you ask for for Halloween?

HAUNTED HOUSES IN KY FOR THE PRICE OF 1!

Can you handle all four of the haunted houses here? Or will you run away in terror?

Fallsburg Fearplex is one of the biggest haunted attractions in the state. There are four distinct haunted houses with different themes, so you’re bound to find something that caters to your deepest phobias.

First, you can walk through Appalachian Nightmare 3D. The man who used to own this farm tainted some moonshine, causing a large number of deaths. Now you can experience what they did in this disorienting area. You’ll go through glowing passages and treacherous trails as you try to escape.

The Freak Fair is their newest attraction for 2021. It’s built on the same grounds the traveling circus used years ago. You’ll walk through the Not So Fun House, experiencing disgusting oddities and homicidal clowns. This mind-bending attraction is bound to be a fan favorite!

Next, check out Crazy Creek. You’ll learn the history of the farm where this haunted house in KY now sits, and you’ll retrace the footsteps of some of its victims. The staff has recreated the sheds and buildings that were originally on the property to help lure back the souls who died to the land of the living. Will they succeed?

Last but not least is the Fallsburg Haunted House. You’ll be immersed in the bloody history as you walk room to room in William Collinsworth’s home. Do the demons still exist inside these walls?

Fallsburg Fearplex follows a unique story that will keep you coming back for more. The owners have worked hard to improve their attraction, and you’ll find something new year after year. Ready to go on a spooky ride from hell?