Google Rating
2.4
Based on 78 reviews 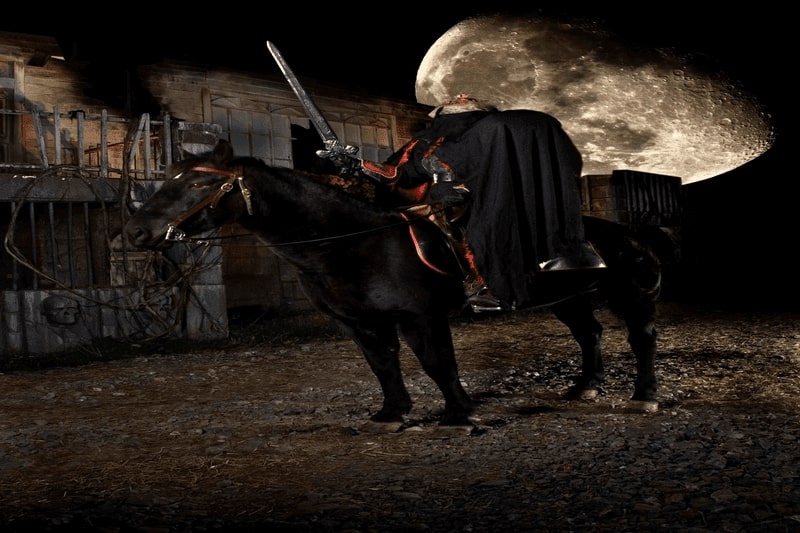 At Haunted Hayrides of Great Rochester, you will experience the terror of a real-life Haunted Hayride through the dark winding roads.
More Info ˅ Less Info ˄ Visit Site > Field of Horrors in upstate New York has been rated year after year as the No.1 haunted attraction in the area.
More Info ˅ Less Info ˄ Visit Site >

The Haunt at Rocky Ledge

The Trail of Terror

Ever wished your favorite theme park was a little…spookier? Bayville Scream Park delivers!

At the end of the summer, Bayville Adventure Park closes and becomes the much creepier Bayville Scream Park! There are six New York haunted houses in this scream park that will leave you screaming. First, step right up to Bloodworth Haunted Mansion, their premier attraction. It’s a creepy manor that was once occupied by the unpleasant Dr. Bascombe Bay, a twisted scientist with a fixation on reanimating dead tissue. He constantly robbed graves and experimented on corpses. When he died, he left the house to his twins, Bethany and Bernard, and the two continued their father’s legacy. They would lure unsuspecting guests into the house, torture them and perform ghastly experiements on them, hoping to learn the secrets to resurrecting their dead father. They succeeded…sort of…and created an army of the undead. You’re invited to the manor for a wonderful stay. They hope to feed you to their zombie minions or use you as their next test subject. Will you escape?

Next, check out Bayville Haunted Asylum! One day, a doctor was trying to perform a tricky procedure on his pregnant wife, but she died in the process. He became extremely volatile and hostile after that. He was obsessed with reversing the process of dying and tested his gruesome theories on unsuspecting patients. The hospital shut down and the doctor escaped, but sometimes lights are on in the hospital at night…and then there’s the screaming… Do you dare to step inside?

If you’re looking for the scariest haunted house in NY, check out Evil in the Woods. Prisoners who were transported from the Bay View Sanitarium for the Criminally Insane never made it to their destination. 35 patients left the hospital, but their transport bus was found destroyed and burned somewhere deep in the woods. The driver’s body was found tied to a tree, and his head was found in another tree. Despite numerous searches, no one was ever able to find these prisoners. But now there’s something awful roaming the Bayville Forest. Will you figure out what happened…and make it out of the treeline alive?

In addition to these haunted attractions, you can also visit Temple of Terror, where you’ll encounter haunted mummies, or The Cage, which will require you to run from genetically modified humans.

This Long Island haunted house is ranked as the city’s most infamous, so get ready for the night of your life!

FIVE HAUNTED HOUSES IN NY…IN ONE!

If you live near Buffalo, New York, Frightworld is the best haunted destination you could ever dream of!

Frightworld is a scream park with five haunted attractions! Your first stop is Eeriepalooza Fear Festival. It’s the most anticipated music festival in the nation, and people plan to attend from around the world. The event is set to take place on the grounds of a family farm with a disturbing past. They used to host carnivals on their property, but the town made them stop because the clowns were too scary. Will the family come to this year’s festival to seek revenge…and will they bring their clowns with them?

You can also check out Grindhouse at this New York haunted house. There’s an old, rustic cabin burrowed deep in the bayou, covered in vines and moss. It’s locally known as the Grindhouse, and it’s inhabited by the most beastly and primitive killers imaginable. There are tales of their brutal slayings, dismemberments, and the desperate screams coming from the house. It’s said that anyone who ventures near the Grindhouse will never return. Will you be the exception?

Nightstalkers Reloaded allows you to explore what it would be like during the apocalypse. Enter the Eerie State Asylum and come face to face with their terrifying patients. Insanity will make you feel like you’ve truly lost your mind. Will you be able to reclaim it?

Frightworld has been recognized by Buzzfeed, Travel Channel, and Frighttour.com, and there are rave reviews from everyone who visits this New York haunted house. Are you brave enough to make the journey?

Jekyll & Hyde’s Haunted Asylum is located right in the heart of New York City, but there is still plenty of room for fear! As you can guess, it has the capacity to make you scream like you never have before!

Rumor has it that the now abandoned Jekyll & Hyde Asylum is haunted. No one has entered in decades, but nearby residents have complained of unexplained sounds and moving shadows coming from within the asylum. In 1961, Dr. E. Revel, the dean of the asylum, was arrested and charged for morbidly experimenting on his patients. Authorities found that most of the patients had been lobotomized…

You and your friends have decided to break into the old asylum to see if the rumors are true. When you arrive, you immediately get more than you bargained for. The first thing you see is a woman with long black hair in front of her face and her mouth opening to reveal hundreds of sharp incisors. Who knows what you’ll discover from there?

In addition to this haunted house in NYC, you’ll be able to visit Jekyll & Hyde’s Club. You can enjoy continuous live entertainment and spooky special effects. The creatures and memorabilia come to life and interact with you while you enjoy your meal and drinks. You might even witness the mysterious transformation of Dr. Jekyll into the horrifying Mr. Hyde! If you’re a little nervous about whether you’ll be able to handle the haunted house, you can attend the club as its own attraction!

Jekyll & Hyde’s Haunted Asylum is the best New York City haunted house! It’s been featured in NYC Go’s official guide, Inside the Magic, and USA’s Greatest Haunts. Plus they have over 900 Tripadvisor reviews!

Usually we think of abandoned buildings and old corn fields as scary. Little did you know, fear was always rising right in the heart of New York City!